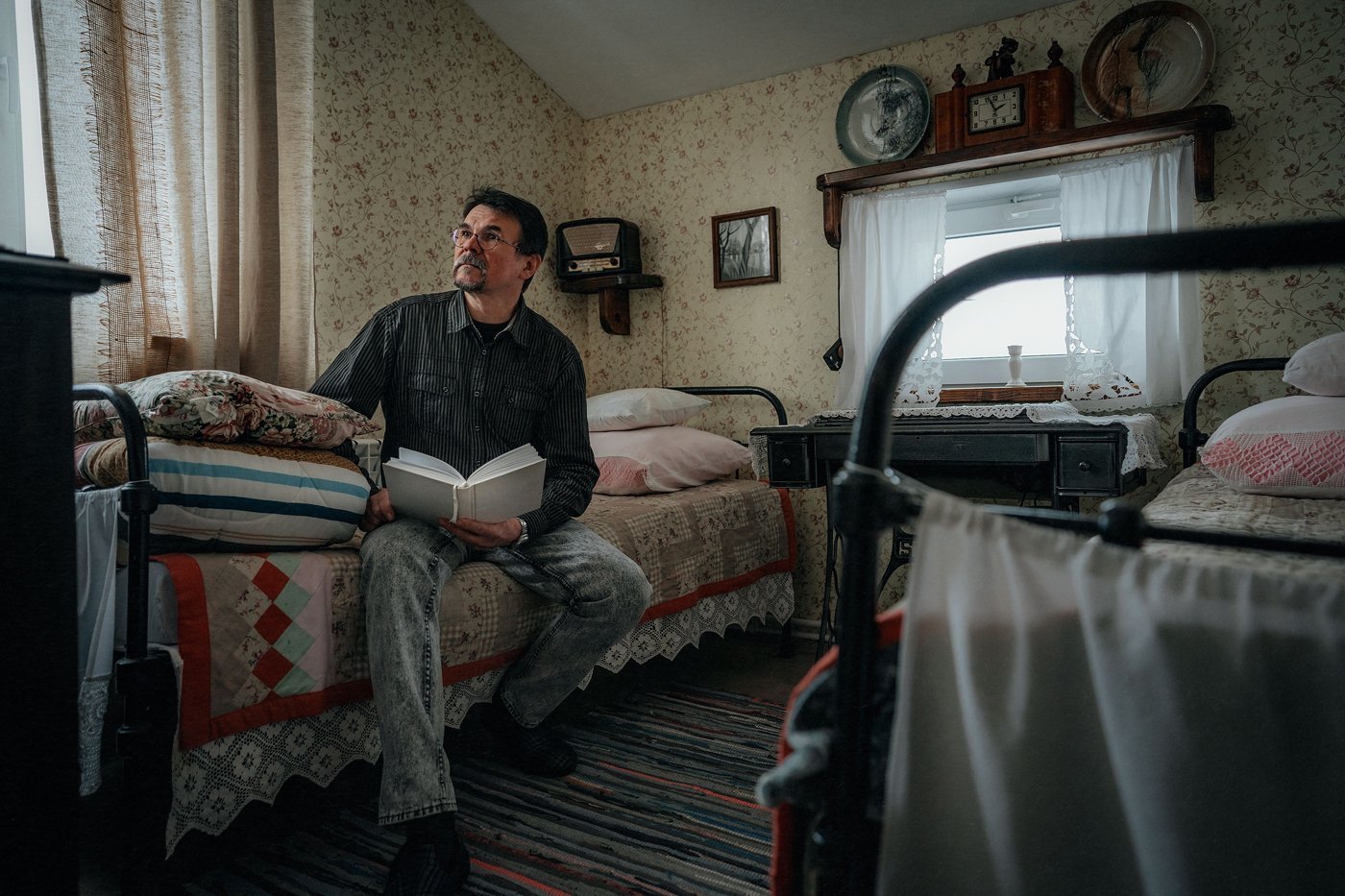 Valentina Miromanova, an art historian, an associate professor of the Russian Institute of Theater Arts of Moscow.

Meaningful Translation
Originally published in “Первое сентября” on 20 of October, 2003

Spatial Awareness Within the Canvases

Formerly known as an art teacher for gifted and talented students in the school of aerospace in Zelenororsk, Yury Popov has now made himself known as a painter with a distinguished talent for spatial awareness in his art.

Initially, I was hesitant to visit Yury Popov’s gallery despite assurances that would be worth my time.

Yet, as I entered the gallery, I immediately was overwhelmed by his artwork. I could see easily that his work was extraordinary and worth the intention of any art enthusiasts.

Since that moment, I have written many articles about Yury Popov’s art. The first of which was titled: “Wildness is the Capital of a Landscape. “It feels as though an entire lifetime has passed since our first meeting. Today, you can no longer find Yury Popov in the remote town of Siberia, where he once lived.

Today, he has made himself widely known and respected as a Russian artist with little left to surprise him in his field. His impressions of art movements in Paris and Amsterdam rival my own.

Yury Popov’s collaboration with the Cigarini Gallery in Geneva, Switzerland provided him an opportunity to explore the unfamiliar horizons of a foreign country and new ways of life.

In Paris, France, Yury Popov worked as a contemporary Russian artist. There, he was met with many challenges, similar to all artists who attempt to make a living as an artist in Paris. Despite these difficulties, his art propelled him into being selected for exhibition at the highly-rated gallery of Espace Pierre Cardin. The center was established by Pierre Cardin, the famous French-Italian fashion designer who always selected the exhibition’s art himself.

Yury Popov has been able to stand out from the crowd in Moscow, Russia as well. His work is exhibited at the House of Artists on the Krymsky Val and at the Nikolskaya Gallery. He has also been featured at the administration complex of the President of the Russian Federation.

Although his art is shown at many high-profile locations, his art is also in demand throughout Russia and his home state of Siberia.

Those who devote their lives to art often retain an air of mystery with their audiences. Their art only represents a small piece of the puzzle of who the artists truly are. Discovering the work of an artist tends to lead us to a desire to learn more about an artist’s philosophy and about what moves an artist to transmit his message to the audience.

As humans, we have an unlimited capacity for curiosity. This leads us to wondering many questions about the personality and life of an artist.

– “May we discuss the more private matters of your life?”, I asked Yury Popov.

– “What on Earth caused you to move from the European side of the country to Siberia?”

– Yury: “It was by coincidence. I have an aunt who lives in Siberia. She visited our family during one of our summer vacations. The stories she told were fascinating. She spoke of the beautiful Siberian landscapes, the Yenisey river, and Krasnoyarsk. I remember pictures she showed us that were black and white, but to my imagination, they appeared to be very colorful. I had developed a passion for art at a young age and with no art school near my home, my aunt invited me to start 8th grade and enroll in the art school in Siberia.

It was very difficult for my mom to let me leave home at such a young age, but she understood the opportunity and allowed me to go. My father was not at home at the time because he was working temporarily in another region. This made it even more difficult for my mother.

– “I understand that this must have been a very difficult decision to make. From my point of view, when people move physically, it also carries many emotional and mental challenges as well,” I commented on Yury Popov’s story and asked, – “What was your first impression of Siberia?”

– Yury Popov: “It was a warm August evening. My aunt and I were taking a train as the final part of our journey to her home. I remember sitting on the train, looking out of the window, and seeing the rail tracks below, alongside the Yenisey river. I found the river somewhat frightening and the mountains full of autumn foliage like gigantic bodies surrounding the train. It was both beautiful and frightening. However, I knew that even if I had to return to my parents after one year at the art school, that I would return to Siberia.”

– “So I assume that you did not return home to your parents after one year as planned. Instead, you enrolled in the fine arts school.”

– Yury Popov: “You are exactly right. The school was competitive to attend, and I was lucky to be admitted on my first attempt. It was a very diverse class that I was enrolled in, and everyone was more talented than I was. Everybody worked so differently and had such unique strengths. We were able to learn so much from our teachers and each other, and this is what propelled us forward. I do not remember any instances of hostility amongst my classmates. We worked hard and we played hard.”

“I spent many hours in school as I attended both public school and fine art school. Despite my busy academic schedule, I participated in many extracurricular activities including guitar, rock-climbing, rappelling, singing, and hiking. I hardly had enough time to do all of the activities I wanted to do, so I would often find myself choosing to sleep at the art school or campgrounds with local geologists, where night snatched me of necessary time to return home. Indeed, it was the happiest time in my life and I knew I would likely never be so happy in my life again.”

– Yury: “Three days after I finished art school, I was drafted into the army, for two years compulsory military service. After I was just dismissed from the military, I enrolled in another highly competitive school of fine arts. It was easy for me to be a good student and I was on the dean’s list with a full scholarship. However, I was trying to find my style of art and traditional education was stifling my creativity. Because of this, I chose to drop out of the second fine art school and became the art teacher for kids at the school of aerospace in Zelenogork.”